Public Speaking is a technique to communicate or have conversation with a group of people in purpose to transfer ideas or information, influence, motivate, educate and entertain the listeners. The art of public speaking is a major key to be learned to persuade, convert and compel people. Even at this age, building this skill means adding a great value to the personality. The fear of public speaking often holds us back, which should be conquered. Tarkik - Pharmacy Debating and Public Speaking Club, University of Asia Pacific (UAP) organized an Intra Department Public Speaking Competition, Spring 2021 in this regard. 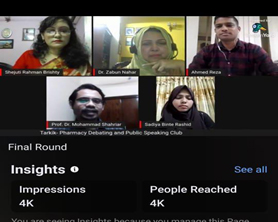 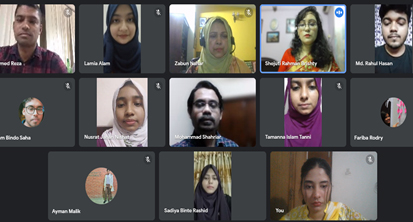 The first round of the competition was held on 27th October 2021 at 7.30 pm with more than 30 students on online platform. Top seven participants from the preliminary round were selected for the semi-final round held on 30th October 2021. Top five participants from the semi-final round reached the final round of the competition. The final round was held on 3rd November 2021 at 7.30 pm via online and was broadcast ‘LIVE’ on the official Facebook page of Tarkik. Dr. Zabun Nahar, Associate Professor and Shejuti Rahman Brishty, Lecturer from the Department of Pharmacy, UAP, and a great media personality Mr. Ahmed Reza, Senior Correspondent and News Presenter of Jamuna Television and Vice-president of Bangladesh Debate Federation (BDF) were present as the Honorable Judges at the final round.

Professor Dr. Mohammad Shahriar, Honorable Head of the Department of Pharmacy was also present as Guest at the event. They encouraged the finalists and also exchanged their own opinion on the speeches and overall performances of the finalists. According to the judgment of the Honorable Judges the first, second and third positions were determined. The Second Runner-up of the competition was Naima Mridha Nidhy from 4th year 1st semester, and Ayman Malik from and Nusrat Jahan Nishat, both from 1st year 2nd semester jointly achieved the First Runner-up position. The Champion of the competition was Lamia Alam from 4th year 1st semester. The result was announced by Professor Dr. Mohammad Shahriar Sir. At the end of the competition the Club Convener, Shejuti Rahman Brishty and the Club President, Fauzia Fariba congratulated the winners and thanked the Judges and Guests.